A radio-show to commemorate the 80th anniversary of Italians bombs on Barcelona
800 BOMBINGS BY ITALIAN FASCISTS AVIATION ON BARCELONA DURING THE CIVIL WAR 2.404 VICTIMS AMONG THE POPULATION 2 YEARS UNDER THE BOMBS IT HAS HAPPENED 80 YEARS AGO "Those who cannot remember the past are condemned to repeat it" That's why I’ve decided to create and write a public radio show to commemorate the victims and raise an awarness about it.
"Spanish war", Barcelona, Bomb, Bombing, Franco, Fascism, Republica, History
17287
post-template-default,single,single-post,postid-17287,single-format-gallery,bridge-core-1.0.5,ajax_fade,page_not_loaded,,qode-title-hidden,qode_grid_1300,qode-content-sidebar-responsive,qode-theme-ver-18.1,qode-theme-bridge,disabled_footer_bottom,qode_header_in_grid,wpb-js-composer js-comp-ver-6.4.2,vc_responsive 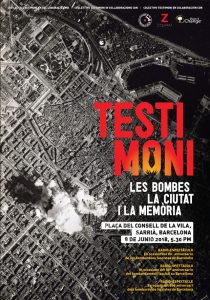 2.404 VICTIMS AMONG THE POPULATION

2 YEARS UNDER THE BOMBS

IT HAS HAPPENED 80 YEARS AGO

Those who cannot remember the past are condemned to repeat it

That’s why I’ve decided to create and write a public radio show to commemorate the victims and raise an awarness about it.

In collaboration with an outstanding bunch of creative people and expert, I’ve first proposed the radio-show on the public square of Sarria district, in Barcelona on June 8th, 2018. The event has been supported by Barcelona City Council and radio broadcasted by Radio Contrabanda.

In March 1938, the General Franco´s Nationalists started an offensive towards Barcelona. With this Mussolini decided to carry out massive air bombings against Barcelona in order to “weaken the morale of the Reds”. Mussolini thought that aircraft could win a war with terror. Between 16 and 18 March 1938, Barcelona was bombed by bombers of the Italian Air Force flying from Mallorca with Spanish markings. There were 17 air raids by the Italian bombers at three hour intervals, during two days. Most of the bombing was in the central areas of the city. Barcelona had little anti-aircraft artillery and no fighter cover.

The bombers glided in at high altitude to avoid being detected by the (pre-radar) acoustic aircraft detection means available, and only restarted their engines after releasing their bomb loads, termed the “silent approach” method. The effect of this was that the aircraft were not detected and the alert only sounded until after their bombs had exploded on target, having a demoralizing effect on the civilian population, which suffered prolonged anxiety quite out of proportion to the number of bombs dropped over the period of time. Coupled with the fact that there was little discernible military value in the choice of targets within the city, and the cessation of the attacks for no apparent reason, it was determined that the raids constituted a deliberate experiment in the use of such tactics in preparation for their application in any subsequent conflict by the Germans and Italians against other European countries. The repeated wave of attacks carried out by the Italians would render irrelevant the air-raid alarm system since it would no longer be clear if the sirens were announcing the beginning or the end of an attack. Furthermore, they used delayed-fuse bombs designed to pass through roofs and then explode inside the building and a new type of bomb which exploded with a strong lateral force, so as to destroy anything within a few inches of the ground.

The bombing of Barcelona affected all the city and the bombers didn’t attempt to destroy military targets. The Italian bombers dropped 44 tons of bombs, and there were more than 1,000 civilians dead. The attack was condemned by Western democracies all around the world. And on 19 March, Franco asked for the suspension of the bombings, for fear of “complications abroad”.

Humanity Will Not Forgive This!

by Ernest Hemingway, published on Pravda on August 1st, 1938

During the last fifteen months I saw murder done in Spain by the Fascist invaders […] You see them do it in Barcelona where they bomb the workers’quarters from a height so great it is impossible for them to have any objective other than the blocks of apartments where the people live. You see the murderes children with their twisted legs, their arms that bend in wrong directions, and their plaster powdered faces. You see the women, sometimes unmarked when they die from concussion, their faces grey, green matter running out of their mouths from bursted gall bladders. You see them sometimes looking like bloodied bundles of rags. You see them sometimes blown capriciously into fragments as an insane butcher might sever a carcass. And you hate the Italian and the German murdererswho do this as you hate no other people. […] Before Teruel, there was the murderous bombing of Lérida. Afterwards there was the horror of Barcelona and the daily raids on the coastal towns between Valencia and Tarragona. Later the Fascists bombed the town of Alicante, not the port, and killed over three hundred people. Still later they bombed the market place of Granollers, far from the war or any war activity and murdered hundreds more. They murder for two reasons: to destroy the morale of the Spanish people and to try effect of their various bombs in preparation for the war that Italy and Germany expect to make. Their bombs are very good.They have learned much in their experimenting in Spain and their bombing is better all the time. […]…not forgive and not forget.

Barcelona has never forgotten those terrible events. The memory of the airstrikes and the terrible toll the city suffered is still alive. This year, a commemoration for the eightieth anniversary of the bombings was organized by the City Hall and the Commission of Memorial Programs. 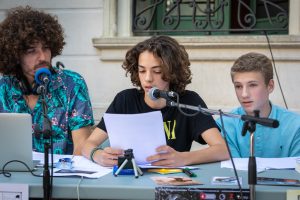 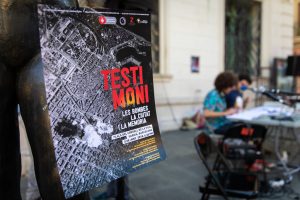 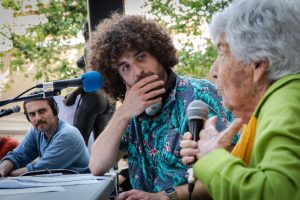 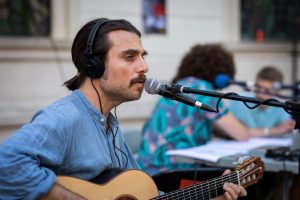 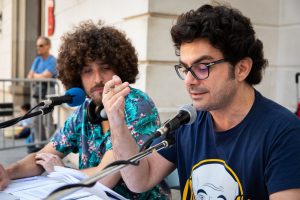 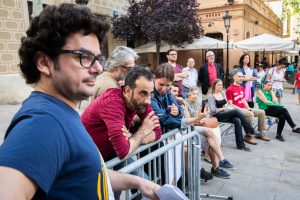 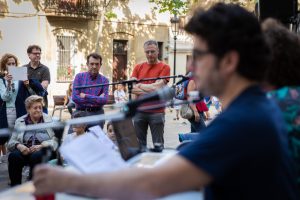