10 Set EterNOT, a video memento for the victims of asbestos

Posted at 03:47h in Environmental, Video by Niccolo

I made this short clip on the occasion of the inauguration ceremony of the park, as a memento for remembering the history of this special place. In loving memory of Luisa Minazzi and the thousands victims provoked by asbestos in this wretched town.

Casale Monferrato, Italy: 110 years after the building of the killer plant of Eternit and after 80 years of production of deadly asbestos items, a park has been raised on the ashes of the huge factory

Inauguration of the EterNOT park 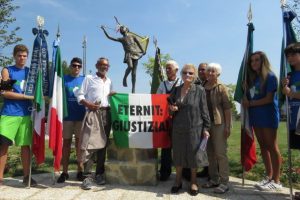 On September 10, 2016, the world came to Casale Monferrato, a small Piemonte town which has, for many of us, become a symbol of the global struggle against asbestos tyranny.
On a day of celebration and remembrance, the community joined together to mark a new future with the inauguration of the EterNOT park built on the former site of the notorious Eternit asbestos factory. Separated by distances great and small, campaigners for asbestos justice sent tributes to show their solidarity with their Italian allies. As the day’s activities got underway in the ornate surroundings of the Casale Monferrato council chamber, the decorative floral arrangements were on display at the front of the room.

Explaining the motivation for these gestures, President Eliezer to João de Souza of the Associação Brasileira dos Expostos ao Amianto (ABREA/ Brazilian Association of Asbestos Victims) said:
“The EterNOT Park has an emblematic meaning not only for people in Casale Monferrato. It is a homage to victims and families around the world who have suffered at the hands of Eternit and other asbestos companies. Brazilian citizens have also paid with their lives for Eternit’s profits. Even though we were unable to travel to Italy for this historic day, we wanted to demonstrate the unbreakable ties between Brazilian and Italian victims.”
Echoing Eliezer’s comments, Fernanda Giannasi, ABREA co-founder, said:
“For Brazilian policy makers this park is a slap in the face. While a beautiful new public amenity has been constructed on Casale’s asbestos ground zero, on the site of the oldest and biggest asbestos plant in Osasco is a Wal Mart hypermarket and Sam’s club. The authorities and politicians in Brazil have not recognized our martyrs and have not shown any regret for the countless number of lives that have been lost.”
Opening the proceedings, Mayor Concetta Palazzetti referenced the global solidarity on display in the chamber. Dr. Daniela Degiovanni, who has been at the forefront of the asbestos struggle in Casale for decades, reported on the reaction to the tributes as follows:
“We all received with emotion the flowers from our global colleagues. The Mayor publicly acknowledged them and named all the associations. I saw many people approach the bouquets and read the words of congratulation and affection. We all know how important it is to remain united in this fight.”
After the welcome, the proceedings were relocated to the 30,000 m2 public gardens where even more people were in attendance to hear the speeches and explore the amenities including the playground, bike path, statues and arena. Dr. Degiovanni estimated that 1,200 people took part in the activities on the day. “The dedication of the park was,” she wrote “the culmination of a 15-year journey to create a public memorial: that place of death has now become a place of life and hope. It has today been returned to its rightful owners – the citizens of Casale Monferrato.”
In the vanguard of Casale Monferrato’s fight for justice has been the Association of Families of Asbestos Victims (Associazione Familiari Vittime Amianto/ AFeVA). Amongst the most stalwart of AFeVA’s leaders has been Romana Blasotti Pavesi to whom a statue was dedicated on the day. Speeches were given by AFeVA’s Bruno Pesce, Nicola Pondrano and Dr. Degiovanni, AFeVA’s scientific advisor.

Musical and dance interludes were provided by local schoolchildren who also gave recitations and displayed artwork on the municipality’s struggle with asbestos. A free public concert was held the following day in Casale Monferrato by renowned Milanese songwriter Roberto Vecchioni who told an interviewer that the new park was: “a beautiful metaphor… almost a Greek myth, the myth of Adonis gardens. It’s a symbol, and symbols help us survive.”
Underpinning the festivities on September 10 was an indestructible resolve to finish what had been started: the fight for asbestos justice. To this end, it is of note to report comments made by Italy’s Minister of Justice Andrea Orlando to the assembly in which he referenced the July 2016 decision by the Constitutional Court which gave the green light for legal proceedings against Swiss asbestos billionaire Stephan Schmidheiny to continue; Schmidheiny faces accusations regarding hundreds of asbestos deaths in Casale Monferrato and other Italian cities. “There is,” Minister Orlando said “a debt of justice that we have to pay.” The Minister reminded the audience that in many parts of the world the commercial exploitation of asbestos continues. Following his speech, Mayor Concetta Palazzetti said that it was Casale Monferrato’s goal “to be the first asbestos-free town in Europe and the first for mesothelioma research.” The park was, she concluded “a symbol of the hope of Casale – the hope that with the government on our side, justice will finally be achieved.”