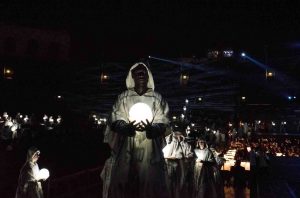 “While Magicarena is a tale of the stage, it’s wonderfully cinematic”

Another very positive article from Canada welcomes the theatrical release of my “operamentary” Magicarena. Film critic Patrick Mullen exercises his trained eye on our piece of cinema with some brilliant intuitions.

Is it magic that makes the opera bright? 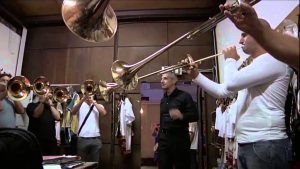 Is it magic that makes an opera bright or good old-fashioned hard work and passion? The immersive observational documentary Magicarena gives audiences a chance to ponder that question while observing what happens behind the scenes at the Arena of Verona for a milestone presentation of Verdi’s Aida. The striking Arena, which was built in the 1st Century, has housed epically scaled operas that draw up to 15 000 attendees at maximum capacity. When a troupe can pack that many operagoers and tourists in one night, the show needs to have some impeccable collaboration, orchestration, and direction to make it go off without a glitch.

Magicarena, like last year’s Ballet 422, chronicles the evolution of an opera from planning to performance, and it inspires similar awe by giving the viewer a front row seat to the production. The film balances the stage performers and the backstage crew as the singers rehearse their arias and perfect the blocking; similarly, the hands that make the elaborate sets, costumes, and props appear to burst at similar octaves while displaying their various crafts. Add a few clashes of egos, like a diva who dislikes the papier-mâché bed the stagehands fashion for her, giving the production daily dramas of its own. There isn’t anything especially new in the action that directors Andrea Prandstraller and Niccolò Bruna capture with the all-seeing eye of their camera, but Magicarena nevertheless impresses by conveying the scope and magnitude of this production.

The fluid cinematography by Andrea Treccani and Massimo Moschin is the true star of the film as the camera effortlessly dances around the arena. On one hand, the film offers a breathtakingly intimate tour of the locale without the cacophony of tourists, letting the Arena of Verona play its own role in the production, offering a reminder of the legacy of the artistic accomplishments, which have taken place where the workers toil. On the other hand, Magicarena gets up close and personal with the cast and crew, invading their space to capture the intensity of the passion and conviction that creates sparks on stage. Rather than being like a fly on the wall, it’s like having VIP seating and a backstage pass. The editing by Luca Gasparini and Alberto Masi is as dynamic as a youthful performer, cutting back and forth between the onstage action and the backstage efforts. While Magicarena is a tale of the stage, it’s wonderfully cinematic.

The directors also go beyond the sights one sees in a stage performance by giving the participants equal weight and screen time. They’re a chorus of sorts. As the film cuts from the stage to behind the scenes, it bridges the music of the top performers with the action of the crew. They all sing the same song. Similarly, the film credits the supernumerary actors for bringing the opera to life by playing fish and other animals that help suspend the disbelief of audiences and let viewers enter the world of the opera. A few snippets here and there show that the task of being an extra requires as much sitting around as it does taking the stage, but the directors convey how it takes a village to make these productions so spectacular. One doesn’t need to like opera to appreciate the scale and complexity of the effort.

Read this article on POV Magazine

Read the article by Glenn Sumi on NOW Toronto

Visit the film page of Magicarena